Artist name: Tank and the Bangas

When Tank and the Bangas show up, you will be treated to a soulful, surprising, funky musical experience rich with organic, flowing beats and lyrics both playful and poignant. This band’s unique style is truly captivating and they don’t shy away from sharing emotion or improvisation. Tank and her fellow band members’ gorgeous  vocals and instrumental melodies expertly span genres, including Spoken Word, Rock, Hip-Hop, Blues and more. From being featured in OffBeat to winning Band of the Year at the New Orleans Big Easy Awards, this one-of-a-kind group’s success is blooming. Listening to Tank and the Bangas brings one back into the present moment and is a full body and soul experience. We were lucky to get interviews with several band members: Tank (lead singer), Albert Allenback (on saxophone) and Merell Burkett (keyboard player). Enjoy more of their music and the interview below.
Other Featured Works:

Also, please enjoy Tank And The Bangas performing Oh, Heart at Sofar New Orleans as well as other videos on their YouTube channel.

5 Questions for the Artists:

Wow. That’s a question. Music is my father. It’s a person I understand yet don’t understand at the same time. Its a bunch of memories of what feels best to me as well as the hope of the memories I haven’t made yet. I hope that doesn’t sound complicated. If I were to make it plain I would say that music is everything that’s familiar to me and I hope to make something that shocks me as well.

Music is sex and food and water to me.

To me, music is everything around us, it’s the wind blowing the tree
leaves, it’s the traffic racing down the highway, and the birds chirping outside etc. To me, music is every element that breaks silence without neglecting the importance of silence.What’s crazy is everyone and everything has the ability to create music, but it takes a special ability or gift to make it tasteful

I made a lot of poetry and little cute songs to go on dates with the poems.

In the past, I made more mistakes than I do now.

In the past, Tank made an album called random me. With the Bangas, she made another album called Think Tank, and we did a live recording called the Big Bang Theory.

3. What are you making now and why?

Now, I make fewer mistakes than I did in the past.

Right now, we are in the process of writing and recording a new album. I think it’s been almost three years since the last album so it’s definitely time to drop something new.

In the future, I hope I make fewer mistakes than I do now.

My hopes for the future are that we, as a band, stick together and weather whatever storm is sent our way. I hope we reach many more of our goals–Grammy–and sustain a long, healthy, and prosperous career and relationship together. And simply to make more dope music.

I’ve gotta feeling this is about to be one of the most exciting moments of my life. I want to soak it up and take not one opportunity or moment for granted. Especially since I’m doing it with the people I love.

I just want to thank everyone that’s been on this journey with us. It’s only the beginning and I can’t wait to see where else this dream will take me

Originating in New Orleans, 2017 NPR Tiny Desk contest  winners Tank and The Bangas have all the qualities that relates them, to the city that birth them but a flair that separates them as well. Their performances range from being “One of the most energetic shows you’ll ever see” to “A gospel tent in Mississippi.” Rummaging through their sound like a thrift store hippie, you’ll find the Bangas to provoke a musical reference of Rhythmic Soul and Spoken word among other genres such as Rock, Gospel, Funk, and Folk. Combining the various musical techniques among the Bangas, coupled with the instilling play on lyrics from the lead vocalist; Tank and The Bangas have quilted a unique sound that singles them as one of the most distinctive groups to come out of New Orleans. The group has graced the cover of one of New Orleans most recognized magazines, “OffBeat” and recently won band of the year at the New Orleans Big Easy Awards. The group has opened for acts such as LiAnne LaHavas, PJ Morton, Galactic, Big Freedia, The Revivalist, and The Soul Rebels. Tank and The Bangas are sure to give you an experience you won’t forget. 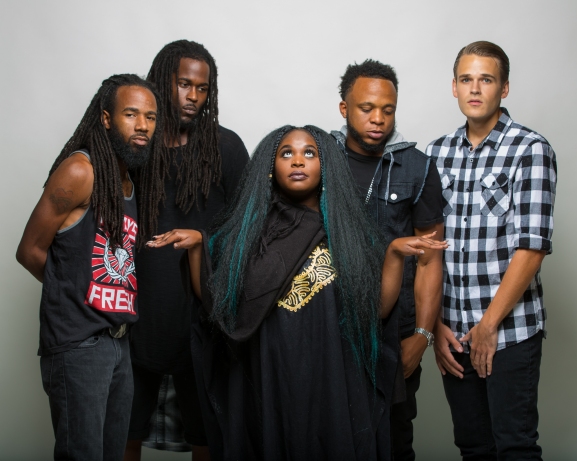