Featured Work 1: Ten Responses to the Phrase, “Man Up”

Writer, activist and two-time National Poetry Slam Champion Guante performs his poetic works with great vulnerability, strength and lyricism and with the powerful intent to communicate deeply and effectively about issues that matter to him. Indeed, the topics he chooses, such as masculinity, gender norms, white supremacy and racial justice, must matter to all of us. Guante is skilled in crafting beautiful and piercing narrative works that can transport the listener both deeper into ourselves and into the cultural worlds we inhabit daily. His works are sharply contemporary and relevant explorations of timeless and universal questions of identity and purpose. In the slam poetry piece,  How to Explain White Supremacy to a White Supremacist, below, he asks,

… when there is a new name hash-tagged each week, when police create more black stars than Hollywood, how long do we keep pointing out the bad apples, ignoring the fact that the orchard was planted on a mass grave?

I’m very interested in pushing back against the view that art has to be some mythical, magical expression of an individual’s innermost soul. It definitely can be, but it can also be so much more than that. It’s a tool. It’s a weapon. It’s a way to communicate ideas and frame issues in a way that can have a direct impact on the world. My art, these days at least, is much less about my innate need to express myself, and much more about the collective process of harnessing the power that words have to move people and influence the larger cultural conversation.

I feel like my journey has been one of finding focus. I’ve always written about the same stuff, and have always been interested in intersections of identity, power, relationships and activism, but in the past, that work was a little more all-over-the-place. As both an MC and a poet, I had a tendency to just spray ideas all over the canvas, in a sense. That can actually be really healthy and maybe it was for me, but figuring out what the specific point that I want to make, and finding a powerfully focused way to do that, has been my primary process.

I’m focusing on creating art that has a concrete, practical application, particularly with regards to movement-building and activism. I realize that that’s a controversial statement, that a lot of artists are really uncomfortable with art having such a specific point to it, but I stand by that impulse. The art can still be honest, raw, and well-crafted; it’s just that for me, all of those things are means to an end, not the end itself. Especially now, in December of 2016, I cannot imagine being invested in making art while not thinking about how that art can support, reflect, or help build political and social movements.

Over this past year, I released an entire hip hop album about race, racism and solidarity called “Post-Post-Race.” I also released my first book, “A Love Song, A Death Rattle, A Battle Cry,” which includes poems, song lyrics, and a bunch of essays on a range of topics. But my most recent project, which I just finished, maybe reflects my philosophy the most: it’s a zine. It’s not even a poem. It’s just some writing about lessons I’ve learned about activism, agency and change. I’m printing thousands of them to distribute at events; the idea is to demystify the idea of activism, to make it as easy as possible for someone with zero activist background to plug in and get involved. With that, it’s not that the zine itself is my art — though it is, in a sense — it’s more about the space that my art creates — whether a hip hop show, a poetry slam or some other kind of event, that’s the distribution method, the way to build relationships, and that matters as much as the art itself.

I believe that art is about both creation and curation. Make cool stuff, but then put in the work to actually get it heard. Like a lot of artists, I tend to move in cycles; this past year was a lot of hustle — even my book was more so a collection of previously-written work than an endeavor of creation — so this year, I want to do more writing. I also want to continue to explore intersections of art and activism, as well as intersections of artist space and activist space — how can we use our platforms as intentionally and effectively as possible?

I realize that all of that is hope for myself. It’s hard for me to wrap my head around the idea of hope in a more general sense, because I think hope, as a concept, is directly tied to accountability and work. It’s like, “I hope Trump doesn’t deport my friends,” but that’s less a statement about a possible future and more a call-to-action for myself and for the people in my community. Hope is something we build, something we cultivate together.

Guante is an MC, two-time National Poetry Slam champion, activist and educator based in Minneapolis. His work has been featured everywhere from the United Nations, to Welcome to Night Vale, to Upworthy, and beyond, and he currently makes a living performing at colleges and conferences using art as a jumping-off point for deeper conversations about identity, power, empathy and agency. 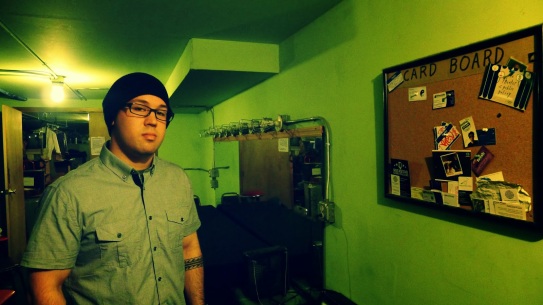