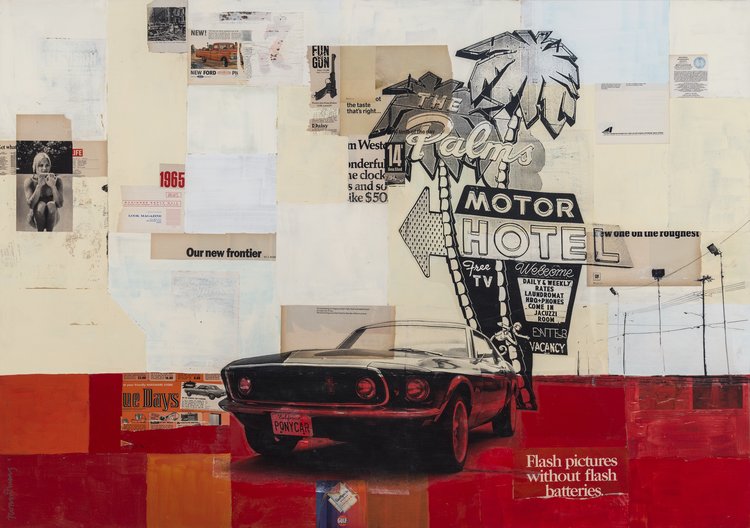 Robert Mars’ beautifully collaged works explore concepts of American beauty, obsession and fame by remixing images of classic icons, logos and trends from entertainment, fashion and political arenas. Many epic personalities can be found within the artist’s multi-layered and repeating Pop imagery, including Warhol on a Coke bottle. With richly colored patterns incorporating vintage designs and memorabilia, he re-frames and reimagines familiar heroes and heroines; portraying Marilyn Monroe as a Madonna and Dr. Martin Luther King Jr. as Superman. Also, as his site bio. explains, “Mars is credited as being the first to incorporate quilt patterns and a Folk Art sensibility into a Pop Art aesthetic, creating his own genre of ‘Folk-laced Pop.'”

Playing with the language of our own cultural signs of fixation and desire, Mars crafts addictively beautiful images rich in both meaning as well as history,

Featured Works Slideshow (contemporary pieces as well as a few of the artist’s works from childhood, which he reflects on below):

Art, to me, is an essential part of being alive. I wake up thinking about it and I go to sleep thinking about it. It is all-consuming in a positive way. The act of creating art brings joy, helps solve problems in a creative way, and makes me constantly assess and rethink my processes and inventing new ways to tell my story through art.

Art is also about evolution. The evolution of how I create art, what is the story I am trying to tell the world and how it grows over time but remains consistent with my theories of why I make art. Art is a way of connecting with the world and having a voice that I do not always have outside of the art world. It is also a responsibility to tell a narrative that is thoughtful, truthful, and engaging for the viewer.

My past artistic endeavors started when I was a small child. [Something] that has been interesting throughout my journey as an artist are the similarities that I have built upon throughout my life. When I look back at what my concepts were when I was seven or eight years old, it was iconic imagery from my world, which included super heroes, funny cars, custom vans, and karate. As I have evolved over time, I am still seeking iconic imagery, but geared towards the world around me today.

Throughout all of the phases of my life, I have always been creative so whether I was making DIY punk flyers for my friends bands, skateboard graphics for World Industries, Element, or Zoo York, T Shirts graphics or materials and colorways for Adidas, or hip hop graphics for Akademiks, I was always using the world around me as a basis for creation. All of these endeavors have played a part in my fine art career and have helped me to understand running a business as well as staying true to your creative vision. I have always felt like it was my job to absorb my surroundings and curate the parts that make a comprehensive story of the world that I am speaking about. Currently in my work, I try to connect past icons to modern culture in a sophisticated manner using vintage ephemera with contemporary processes.

3. What are you making now and why?

The work that I am creating today is a steady progress from 1998, when I started exhibiting. Where I am in my life dictates what my work becomes. In the late 90s, I was looking at the American West and the landscape that has become synonymous with that part of the country; small pass-through towns from the Route 66 era, neon signage from abandoned motels, vintage cars, and a sense of open space. In the late 2000s my work shifted to focus on American and global icons such as celebrities, brands and objects. Since then, I have redefined my art by adding neon tubing to add a sculptural light effect — also very prominent in Los Angeles and the Southwest — [and making] PopForms, engineered shaped panels that expand out of the square or rectangular format common in art. My next venture will be Time Capsules. These are framed shadow boxes that incorporate vintage objects within the frames to add a dimensional aspect to the works but remain within the themes of my work.

My hope for the future is to continue progressing and finding new ways to tell my story, whether it be through the use of new iconic imagery, redefining my processes, or using different formats and materials. Over the past few years, I have had several museum shows and I would like to continue this. In addition to exhibiting my work to a broader audience, I also enjoy residencies that include lectures about my theories on art and workshops that discuss my process and how I came to understand the materials I was using to push the boundaries of how they can be utilized.

I think my final point would be that my artwork, including the imagery I choose, the collaged materials, quilt patterns, wallpapers and colors, all play into a larger theme of why I create art. No part of my art is random and it all has significance to an overarching theme of iconography and past history relating to the contemporary. I research diligently to allow my vision to act as a unique view of America’s “Golden Age.” My wonderment of American culture is on going. The middle of the 20th century has had a huge grip on culture, style and form, and that is so evident in the timeline of history. My work poses question to the viewer as to why some things become iconic and others fade away over time, but does not answer the question. I leave that up to the viewer. Secondly, in any artist’s career, there is hope that eventually a pivotal moment happens when their work stops being compared to the earlier generation and they become a leader for their genre. Around 2015, a younger generation of street and Pop artists paying homage to my work and inspired by my signature style emerged. This was brought to my attention by several of my galleries and was validation that I have been on the right path.

Chronicling a fascination with 1950’s and 60’s iconography, Robert Mars has produced a body of artwork from his studio in Connecticut that celebrates the commonplace objects and icons of an America long past in a thoroughly modern, and exquisitely constructed, manner. By taking inspiration from the Golden Age of American popular culture and celebrating figures of the 1950’s and 60’s, Mars’ artwork chronicles an evolving relationship with celebrity. By merging his own concept of personal idols with those of mainstream culture, Mars is able to focus his work on a deeper analysis of the Golden Age of Americana. A graduate of Parsons School of Design in New York, Mars often references his decades as a graphic designer in his work.

In 2014, after serious reflection upon his artistic thought, his process, wanting to explore traditionalism from another angle, and through influence from his wife, Mars began to delve deeper into American culture by focusing on Folk Art and Contemporary American Quiltmakers. By combining vintage wallpapers with quilt patterns Mars was able to further differentiate himself from the scores of artists using similar iconic themes. Mars is credited as being the first to incorporate quilt patterns and a folk art sensibility into a pop art aesthetic creating his own genre of folk laced pop.

Robert Mars’ artwork is exhibited worldwide including museum collections in Munich, Tokyo, Amsterdam, London, Boston, New York, Los Angeles, Laguna Beach, Paris, Aspen and Naples. His artwork was selected for the Absolut Vodka Blank campaign alongside Damien Hirst, and his largest sized piece to date was acquired by Philip Morris/Altria for their corporate headquarters in Virginia. In 2015, Mars was chosen for the cover of Neiman Marcus’ May Book, while Coca­Cola purchased several existing works and ordered commissions for a world tour celebrating the 100 year anniversary of their trademark bottle shape, in which his artwork was spotlighted. 2016 will see Mars as a  featured artist for a custom high end wallpaper and tile series with Kari Whitman Interiors in Los Angeles. He will have a solo exhibition at the Evansville Museum of Art in Indiana, where he will also be an artist in residence and guest lecturer, followed by group exhibitions at the Coca-Cola Museum titled “Effervescence” and the Cornell Museum titled “Fifteen minutes”. In late 2017 he will have his first published coffee table book through Scala publishing and DTR Modern Galleries. 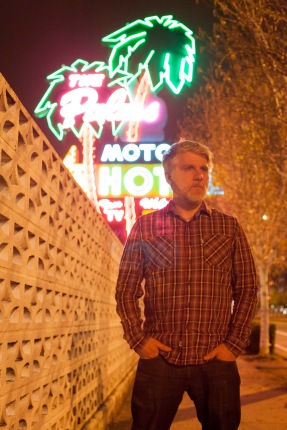 Robert Mars is represented by PR for Artists.
5 Questions for the Artist, © Julia Travers